Where the Book Fair lives

Print this coupon and bring it to the fair 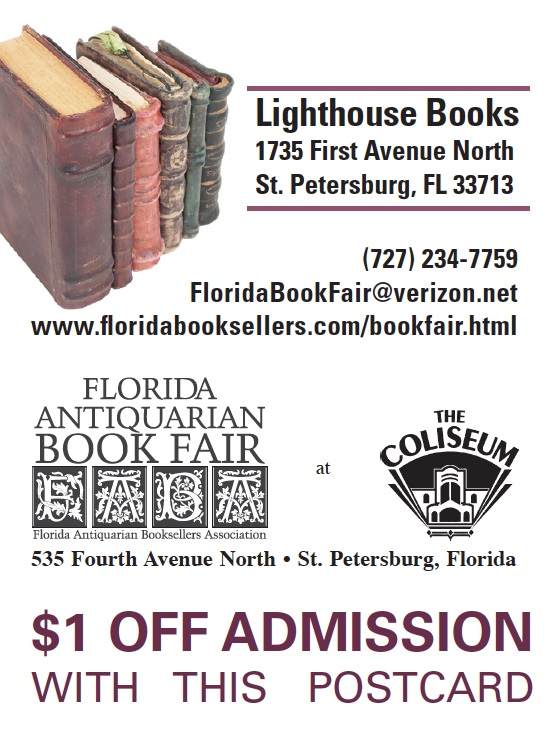 WWI authority to speak at the Book Fair

The University of South Florida professor is an authority on modern wars, particularly World War I. He will be the featured speaker at the 30th Annual Florida Antiquarian Book Fair in March.

Tunstall wrote the definitive book on a war the leaders of Austria-Hungary, Poland and Russia wanted everyone to forget because it was such an utter disaster.

Volumes have been written about the war on the Western Front, much of it fought in France. It was a conflict that introduced trench warfare, barbed wire and poison gas, and left nine million people dead. It resulted in a great body of literature and non-fiction works, including Alexander Solzhenitsyn’s August 1914, Ernest Hemingway’s A Farewell To Arms, C.S. Forester’s The African Queen, Erich Maria Remarque’s All Quiet on the Western Front and, of course, many more.

Lesser known until Tunstall’s book was the war on the Eastern Front, a conflict that was less about the clash of troops than it was about each army’s struggle with the terrain, the weather and the lack of supplies. 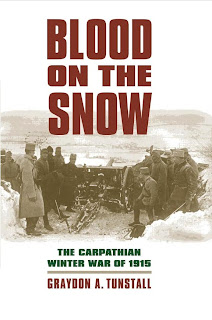 Tunstall’s book Blood on the Snow is subtitled The Carpathian Winter War 1915. It is a chapter in European warfare history that the leaders of Austria-Hungary, Poland and Russia wanted people to forget about, fraught as it was with such ill-considered policy, strategy and execution.

In the winter of 1915, huge Russian and Austrian-Hungarian armies engaged in fierce campaigns that resulted in their near-annihilation. The mission: to rescue 130,000 Austro-Hungarian soldiers who were trapped by the Russians in Fortress Przemysl, which sits about 160 miles east of Kraków near the Polish border with the Ukraine.

Tunstall’s research showed that troops on both sides were ill-equipped, ill-trained and ill-informed for their missions. Furthermore, official policy hid the results of the war from the citizens of all countries involved. It was a chapter in each of their histories that leaders simply wanted to go away. A million soldiers on each side died in the conflict. Many were the victims of the fierce winter and the lack of proper equipment and supplies.

One of the results of Tunstall’s research is that descendants of soldiers who fought and died in these campaigns have now learned the truth about what happened. Only the grandchildren and great-grandchildren of these soldiers remain, and family stories lacked any satisfactory details of the soldiers' fortunes. Tunstall encountered family members in Vienna who sought him out to learn more about their ancestors.

In the end, troop casualties from the rescue mission far outnumbered those requiring rescue. The trapped forces ultimately surrendered to the Russians and were shipped off to Siberia. And, until Tunstall’s book, there was little understanding of how important that conflict was to be to the futures of Russia, Germany, Austria and Hungary.

Since his book came out last May, Tunstall has been in demand as a speaker, appearing at the U.S. Army Command and General Staff School an Fort Leavenworth, Kansas, the Osher Lifelong Learning Institute at the University of Southern Maine, and regionally at the Western Front Association’s Florida Gulf Coast Chapter in Gainesville.

Origins of the FABA logo

In the early ‘90s, Tampa Bay marketing pro Larry Kellogg took over management of the Florida Antiquarian Book Fair, which he continued for the next couple of decades. One of his early executive decisions was to create a new logo for the book fair, and there hangs a tale.

Kellogg, who was promotions manager for WFLA TV and Radio for several years and later was marketing manager for Bayfront Center, was also a circus nut. He went often to the circus as a kid growing up in Kansas. He loved the big top and everything about the circus, but especially the marketing and advertising -- the colorful hucksterism of it all.

Kellogg struck up a friendship with Mike Slicker, first president of the Florida Antiquarian Booksellers Association, and a founder of the book fair. Eventually, Kellogg was asked to manage the annual fair.

Kellogg was an early adapter when it came to desktop publishing. He owned a TRS-80, Tandy Corporation’s early entry into personal computers, which was known affectionately by users and dirisively by detractors as the Trash 80. Kellogg toiled with an early version of CorelDRAW, a graphics program.

When Kellogg took over management of the book fair, one of his earliest moves was to create a new logo. He found illuminated letters in an art font program and constructed the logo in CorelDRAW, carefully cutting and pasting each letter and adjusting them until he got the look he wanted.

The logo was evidently an exercise in restraint, alien to his natural circus inclintions. Graphics experts and instructions for CorelDRAW advise using perhaps two, but never more than three fonts in a flier, Kellogg notes (he used only two fonts in the FABA logo).

“The only place you use more typefaces than that is on a ransom note or a circus poster,” Kellogg says with some amusement, ‘and you can use as many as you want on a circus poster.”

A pluck in time at the Florida Antiquarian Book Fair

Meredith Coffman has been playing the harp for more years than the Florida Antiquarian Book Fair has existed. She was playing about a decade before the  Tampa Bay mecca for bibliomania was even considered.

She's pretty top drawer herself, which is why she'll do a special performance when the 30th Annual Florida Antiquarian Book Fair gets under way on the evening of March 11 at The Coliseum in downtown St. Petersburg.

After all, only the best for the Southeast's largest and best antiquarian book fair, right?

Meredith Coffman has the credentials. She graduated from USF with a bachelor of music degree. She taught there, too. Her subject: harp, of course.

A harpist plays where a harpist is needed; if you've spent a lot of time at weddings or funerals in the Tampa Bay area in the last couple of decades, there's a good chance that you've come across Meredith and her harp.

A perfect setting for the Book Fair


The Coliseum was built during the Roaring Twenties as a ballroom. It was the Jazz Age, and young flappers just wanted to have fun; amid the ballyhoo and trumpery of the real estate boom, the American idols of the times like crooner Rudy Vallee set hearts aflutter with their boyish good looks and their melodious voices.

St. Petersburg residents consider it a treasure, and rightly so. With its polished oak floors and graceful arches, the venue, no longer used exclusively as a dance hall, still excites those who enter its doors. It evokes a time past when jazz and swing were in the air and big names like Paul Whiteman and Harry James brought their big bands to the Sunshine City.

The city of St. Petersburg bought the building in 1989 and made extensive renovations, including a large refinishing project completed just last year.  It is considered one of the Bay area's most unique facilities, hosting trade shows, dances, banquets, and, of course, the annual Florida Antiquarian Book Fair.

Use the buttons below to share this article with your friends.
at 5:54 PM No comments: