The perfect gift for your book lover! Book fair tickets! 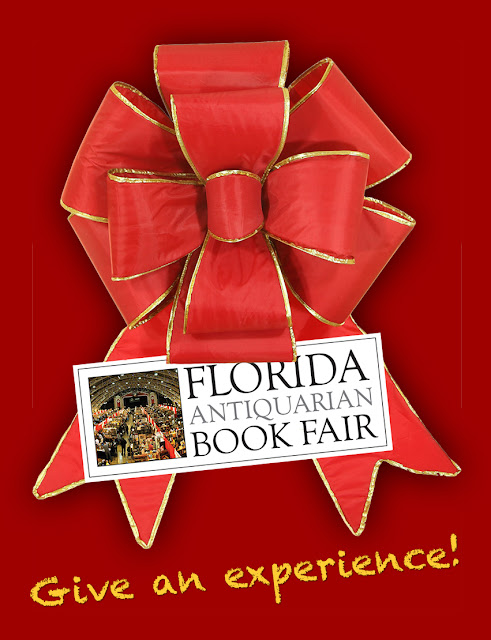 Christmas is only a few days away, and whether you've finished your shopping or not, here's an idea for a very special gift for your book lover.

And we've got the perfect one. Give an experience: a weekend at the 2015 Florida Antiquarian Book fair. It's an adventure.

Consider this. At the Florida Antiquarian Book Fair, more than 100 top-notch antiquarian book dealers from all over the country converge in St. Petersburg for one weekend. For the book lover, that's Paradise. Your book lover can browse beautiful, rare, unique, and amazing volumes that go for thousands of dollars or delicious reading copies of favorite classics that cost only a few dollars.

Here's the best part for you, the generous gift giver. You can order the gift right from your computer. Right now. No fighting traffic. No standing in line at the malls. Nothing but clicking a few keys and you're there.

Just click on the link to Eventbrite where you can purchase tickets and you'll have this plan in the works without ever leaving your computer screen. Your book fair adventure starts here.
at 5:29 PM No comments:

RARE BOOK CAFE: Boe Rushing, Back in the Day Books, on setting up an independent rare bookstore in today's market

WATCH LIVE: Boe Rushing is opening his bookstore next year for the third time in the Tampa Bay area. Boe opened Back in the Day Books in 2010 in Tarpon Springs. In 2013, he moved to Dunedin, where he was in two different locations, one on the main street in town and the other slightly off the beaten path. Boe reluctantly decided in 2015 to close again. Now, through a special public-private lease arrangement, Boe has a new location in downtown Dunedin and expects to reopen in March in a new building with an historic facade.

Boe believes in supporting local businesses, and particularly local bookstores. He'll discuss both topics on Rare Book Cafe. You can watch Boe's appearance on Rare Book Cafe on Saturday at 2:30 p.m. ET on blab.im. You also can watch the program live right here on the book fair blog.

Boe received a law degree from Stetson University's College of Law in 1993 but he has spent little time in his career as a lawyer. In 2001, he moved to Canada to get married but he wasn't able to practice law there without jumping through too many hoops so he decided to find a career where he could be self-employed doing something he loved.

A conversation with a rare book dealer led to the realization that the antiquarian book business was perfect for him. He opened a shop in Canada in a 150-year-old building a couple of doors down from a coffee shop. The neighborhood had lots of "book people" and the business thrived.

After the birth of his daughter, Holly, in 2004, Boe sold off his inventory, closed his first bookstore,  and he and his family moved back to his native Florida. Boe sold books online. A scholarship to the Colorado Antiquarian Book Seminar in 2009 led to the conviction that he really wanted to have a bricks-and-mortar store and the rest is history.

You can watch Rare Book Cafe on Thursdays at 8 p.m. ET and Saturdays at 2:30 p.m. ET on blab.im. Replays of the program also are available at blab.im as well as on the Florida Antiquarian Book Fair blog. Selected episodes also can be watched on the book fair's YouTube Channel.
at 11:53 AM No comments:

WATCH LIVE: With Star Wars: The Force Awakens opening on Friday, we have a special treat on the next edition of Rare Book Cafe. We’ll be talking collectible Star Wars books and other items with Mike Cotter, who recently opened Back in Time Rare Books, specializing in 1980s popular literature.

Patrons of the Florida Antiquarian Book Fair may remember Mike Cotter from his days at the popular Yeoman’s in the Fork Rare Book and Document Gallery in Leiper’s Fork, Tennessee. Mike represented Yeoman’s for years at the book fair.

Now he has begun a new endeavor, embracing his early love of the Star Wars franchise, the Indiana Jones franchise, and the Back to the Future franchise, among others. Mike and his family moved to St. Augustine, Florida, where he opened Back in Time Rare Books to market his extensive and growing collection of literature, board games, toys, and other items related to those immensely popular films.

Hollywood turned out Monday evening at the Dolby Theatre for a red-carpet premiere of the seventh film in the series, the first Star Wars film released in a decade. The revival of the franchise will likely lead to increased demand for the books, computer and video gams, comic books, 8-track cassettes and more spawned by the original first two trilogies. Mike Cotter has been hard at work gathering many special related items and is ready to show some of them on Rare Book Cafe. Expect to see some rare signed pieces and to hear some of the great stories Mike has collected.

Rare Book Cafe will now be seen live on Thursdays at 8 p.m., having been moved from Wednesday afternoons. Our first couple of evening episodes were well received so we're continuing with the schedule that many find more convenient. The program will continue to be broadcast on Saturday afternoons at 2:30 p.m. Steven Eisenstein, owner of A-Book-A-Brac Shop in Miami Beach, Florida, is the host of Rare Book Cafe. His co-host is Thorne Donnelley, owner of Liberty Books in West Palm Beach, Florida. Edie Eisenstein, Steven’s wife, is often featured in a segment on miniature books.

Not only will you be able to watch the live broadcast here on the book fair blog but you also can watch the replay after the program is over. Please share this program with your friends.

COMING SATURDAY: Bookseller Boe Rushing, owner of Back in the Day Books, on setting up a bookstore and why you should support local businesses in your community. Join the conversation on Rare Book Cafe.
at 10:48 PM No comments:

A new series: Get to know the booksellers

Okay, this is an early notice about a new occasional series we're introducing soon about the book sellers who will be at the Florida Antiquarian Book Fair in March. It may surprise some readers to know that some booksellers have lives beyond their realm as booksellers. We're going to be looking into the special interests of some of the booksellers you'll see at the book fair. Stay tuned. If  you know a bookseller you think would be a good subject for our series, please let us know. Send an email to floridabookfair2@gmail.com and put SECRET LIVES in the subject field.
at 5:05 PM No comments: