Of Kerouac, the Flamingo, and a literary roast


I had a delightful time on Saturday hanging out with Tiffany Razzano, the driving force behind Wordier Than Thou, the literary arts organization. We were on the deck outside the Flamingo Sports Bar, Jack Kerouac's favorite St. Petersburg dive bar back in the Sixties. Wordier Than Thou is presenting a Literary Roast of Jack Kerouac Fundraiser from 6 p.m. to 9  p.m. on Sunday, January 20 at The Studio@620 in downtown St Petersburg.

We did a LIVE broadcast from there and over a couple of beers talked of various things literary in St. Petersburg. The original was broadcast on Facebook but there's recording of it embedded above.

Tiffany told me she had developed the idea for a literary roast with plans to roast living local authors. Funny thing, there were no takers. Local writers didn't want to be targets of gentle, good-natured mockery. Hmmm.

So she turned her attention to authors who couldn't take umbrage, and Kerouac, with his local connection (he lived here about five years) seemed to be the perfect choice. Perhaps. Some say Kerouac's spirit haunts Haslam's Book Store. If so, might he make his way to The Studio@620? Who knows? You can bet he'd have had plenty to say if he were alive.

What you missed on the Rare Book Cafe on Saturday, including a special limited-time, limited quantity ticket offer 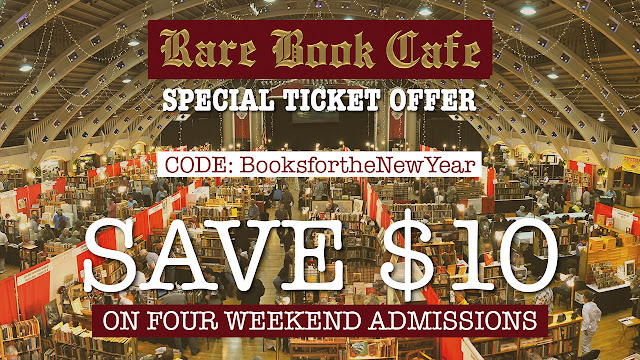 So, on Saturday on the Rare Book Cafe,  we announced the special offer you see at the top of this blog. It's something we've never done before so this is an experiment of sorts -- and an opportunity for you, book lovers.

For a limited time only, you can purchase four tickets for the Florida Antiquarian Book Fair in April at a special price and save $10. The key is that you have to act quickly because there are only a limited number of these tickets available and it is available only for a limited time. Be sure to use the special code to unlock this hidden ticket offer. The code is in the graphic above. The button below will take you right to the Eventbrite.com page for the book fair.

Our guest on Saturday's show was veteran bookseller GiGi Best Richardson, a longtime exhibitor at the book fair. GiGi and her husband Skip have just opened the Best Richardson African Diaspora Literature and Culture Museum in Tampa.

You can view the Rare Book Cafe episode below.