No one anticipates the new season of the PBS hit Downton Abbey more than fans of the Florida Antiquarian Book Fair. It's a natural fit. It's inevitable, we think, that people who are attracted to beautiful leather-bound antiquarian volumes, antique maps, vintage photographs, historical ephemera, and the myriad other items found at the book fair, are going to gravitate to a post-Edwardian costume drama with plenty of plot twists served up amid delicious period detail.

And why not? Many of the treasures found at the Florida Antiquarian Book Fair would be quite at home in the Yorkshire country estate of Lord Grantham and his family. It's too bad we rarely get to see much of what's on the shelves in the library but there's far too much intrigue among the family members and the staff for anybody to take time to look at the the books. Still, we'd guess there would probably be some volumes on English history, and maybe some English literature.

Wonder what else might be there? What are your thoughts? Who would Lady Mary read? What about Cora or Lord Grantham? Do you suppose Tom Branson would have quietly added some political treatises? What do you think Lady Edith might be reading?

Awhile back, the New York Public Library compiled a list of books likely to be of interest to Downton Abbey fans. It included such favorites as E.M. Forster's A Room With a View and Howard's End as well as Ken Follett's Fall of Giants, Kate Morton's The House at Riverton, Katharine McMahon's The Crimson Rooms, Frances Osborne's Park Lane, Eva Ibbotson's A Countess Below Stairs, Daisy Goodwin's The American Heiress, and Edith Wharton's The Buccaneers. Nice list.

We know where we'll be on Sunday, January 4. Glued to the television (a rarity for us) for the premiere episode of the fifth season of Downton Abbey. Yes, we're well aware that the new season already aired in Britain and is readily available for viewing online. We prefer to wait for the PBS airing. It's better quality and if it helps PBS and our local PBS station, we're happy to do it.

Meanwhile, we've already blocked out Friday, Saturday, and Sunday, March 13, 14, and 15 on our calendar. We'll be at the Florida Antiquarian Book Fair immersing ourselves in all the beautiful books, prints, maps, and more.
at 5:00 AM No comments:

Among booksellers, the more the merrier

One of our great exhibitors at the Florida Antiquarian Book Fair every March raises interesting questions about whether dealers should let their fellow dealers know where they'll be exhibiting.

Mike Cotter of Yeoman's in the Fork in Franklin, Tennessee, suggests that some dealers may not want their competitors to know where they're finding their great treasures.

In his blog, Mike lists the pros and cons about using an events page to let customers (as well as other dealers) know where they'll be at any given time.  But we think Mike comes down on the right side of that question, with an inclination to put the events out there on the calendar and let everyone know where to find him.

Dealers who are showing at various book fair around the country, as Mike and his colleagues do, have access to far greater selections than dealers who simply stay at home. Clearly, they also are likely to have a broader customer base. Booksellers who come to the annual Florida Antiquarian Book Fair have built up a cadre of followers who always make sure they come to the book fair to see their favorite dealers.

Booksellers make great book buyers. Dealers always buy from each other. Mike note that he loves to go to shows to buy inventory for his great customers back home. He notes, though, that some dealers may be concerned that competitors will scoop up the treasures if they find out where to get them. We like that Mike comes down on the side of those who believe that what's good for the industry is good of everyone involved.

We, too, believe that booksellers as well as book collectors should become as knowledgeable as possible, and they do so by being in contact with as many like-minded book lovers as possible. We share the belief that the more book lovers are exposed to great books and friendly, informed dealers, the better it is for everyone.

When the Florida Antiquarian Book Fair rolls around in March, we hope you'll come by for a visit. Stop by and say hi to Mike Cotter. You'll be glad you did.
at 7:55 PM No comments:

How to be a hero to your book lover 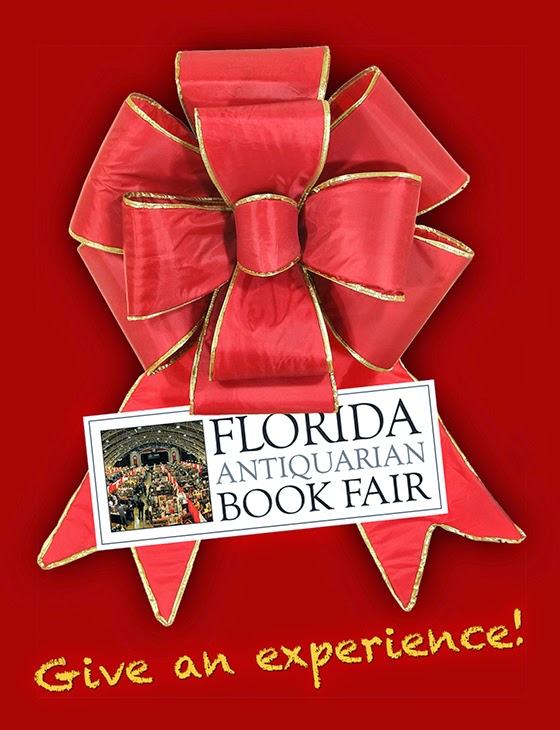 It's really not too early to think about the Florida Antiquarian Book Fair. Here's why! Yes, the book fair isn't until March but Christmas is just around the corner. A perfect gift for the book lover in your life might be the experience of attending the Florida Antiquarian Book Fair. You can order tickets right now thanks to the miracle of modern science and our friends at Eventbrite. Here's the link. http://www.eventbrite.com/e/2015-florida-antiquarian-book-fair-tickets-9658568037 Buy the tickets. You'll get a confirmation by email that you can print out. Slap a bow on it and you're done. Plus, you're a hero to your book lover.
at 2:36 PM No comments: