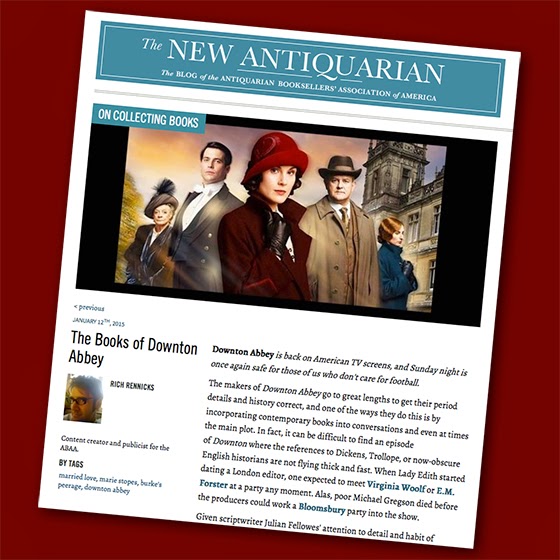 Apparently what prompted the post on The New Antiquarian was discussion in a recent episode of a book Married Love or Love in Marriage (1918), a book on contraception and pregnancy by pioneer birth control advocate Marie Stopes. A controversial bestseller at the time, the book sold five printings in the first year and continued to be published decades later. It's not widely available today and is clearly among the ranks of antiquarian books. Among the oldest ones ABAA has listed are a 1918 American edition for $200 and a 1923 British edition for $495. Also, there is a related 1918 typewritten letter signed by Margaret Sanger, found of the American Birth Control League, offering the book for sale.

We love how meticulous series creator Julian Fellowes is about making literary references in the program. We had forgotten about the business with the Gutenberg Bible last season until it was mentioned in the ABAA blog. It's easy to miss since it's only a passing reference. Seems the Downton Abbey estate has one of the rarest books in the world but nobody knows exactly where it is in the vast libraries of the castle. And, clearly, nobody is too concerned about it. Heck, it never even occurred to anyone that they could auction it off and realize enough profit to stabilize the family's finances.
at 11:17 AM