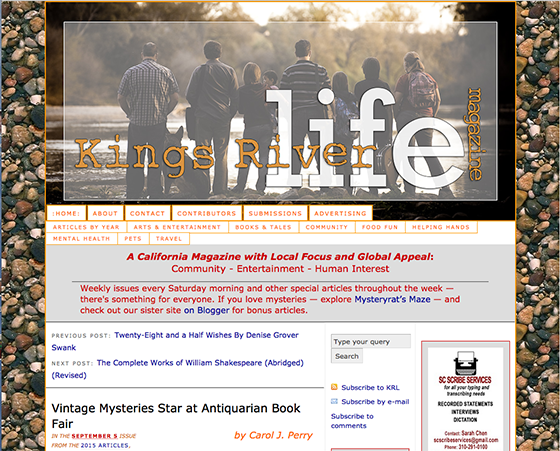 Carol’s article reveals everything from a stack of 1960s Alfred Hitchcock Mystery Magazines marked at $10 each to a 1936 first edition of Graham Greene’s This Gun For Hire at $3,000. There were numerous examples of mystery books priced between those two extremes with familiar names like John D. MacDonald, Ellery Queen, Raymond Chandler, Stephen King, and Franklin W. Dixon. She even tells of a Florida mystery by Alfred Payson Terhune, who was better known for his Lad, A Dog and other books about collies. The book: a 1929 first edition of The Secret of Sea-Dream House. Price: $400.

The article is vividly illustrated with a photograph of Sonny Ideker's alcove, which featured many beautiful leather-bound volumes, and with closeups of many of the books discussed.

Kings River Life Magazine is an online publication that covers the San Joaquin Valley in California. In addition to local features, the magazine also includes a mystery fiction section that highlights author interviews and short stories.