And the week started so well

Last night, shortly after I finished my marketing plan for Rare Book Cafe, and added some material to our shiny new Facebook page – launched on Tuesday – producer Allan Smith called me to join him in a test of the new opening credits sequence he’d created for today’s show.

It’s a fine piece of work. You can see for yourself:

I signed into Blab.im, the nifty beta platform that gave Rare Book Cafe its unique, interactive home. And, in lieu of the home page- and Allan in the Test Zone, I got this: 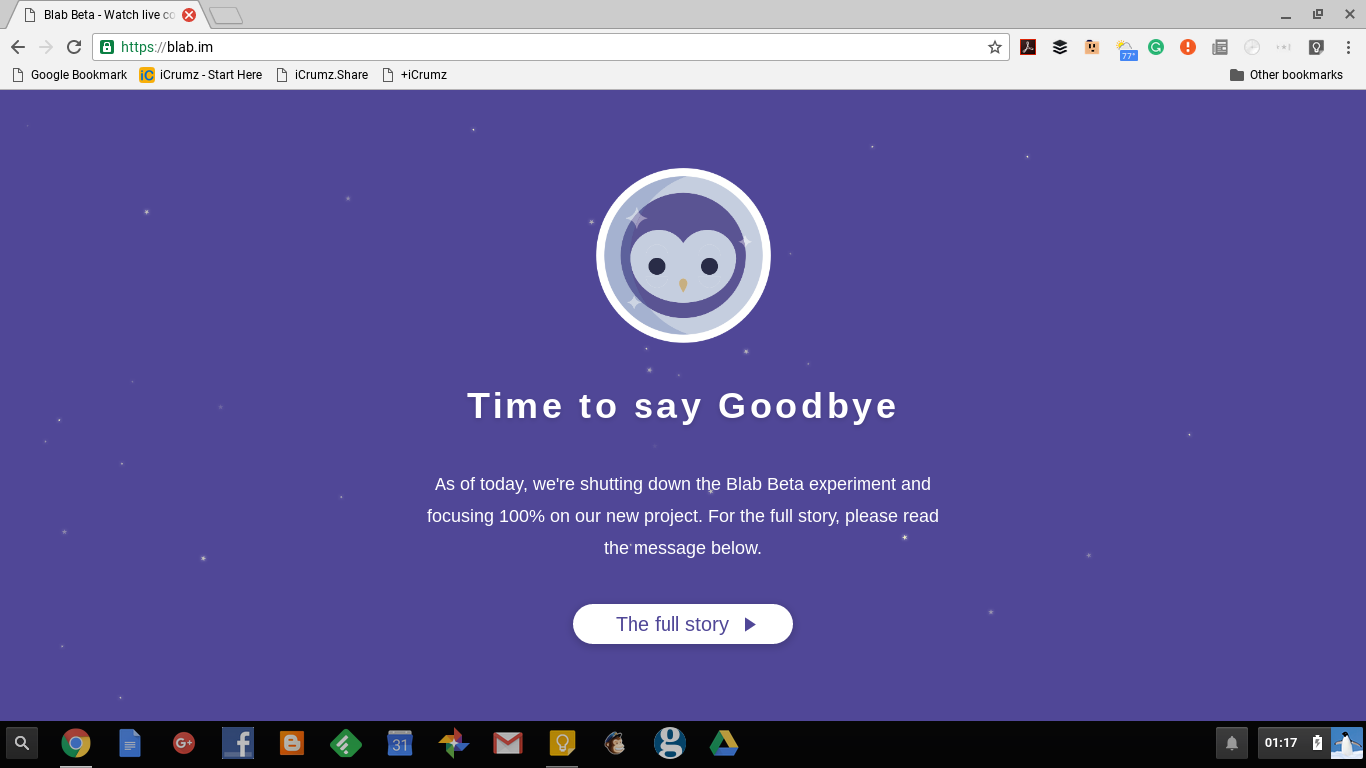 We'd had no notice.

After a brief, but wrenching, existential wail translating as “WTF!?!”, I told Allan, “We’re toast.”

Clicking “The full story,” see, leads to an article on the Medium where the Head Blabber explains they got bored with their toy and threw it out. At 9:00 p.m., they turned the switch off and went out to drown their sorrows in artisanal beer and the promise of a new round of funding. They’re going off to make a new, even cooler product, they say,  and somewhere, someday, they will tell us all what it is.

So we’re off the air as of today. On hiatus. It’s a midseason break like the ones Scandal, and How to Get Away with Murder get away with in November, only in summer.

Rare Book Cafe is an opening in search of a show: “Mimes on Radio”. We’re here: you just can’t see or hear us.

Or as the customer said of the Norwegian blue parrot, “It's not pining, it's passed on. This program is no more. It has ceased to be. It's expired and gone to meet its maker. This is a late podcast. It's a stiff. Bereft of life, it rests in peace. If you hadn't nailed it to the perch, it would be pushing up the daisies. It's run down the curtain and joined the choir invisible. This is an ex-internet show.”

Nuts to that, we say.

We’ve already put in several hours looking for workarounds via existing video chat platforms. I suspect that’s how the rest of this night will pass, and the rest of the weekend.

Rest assured: we will be back on the air as soon as we get a new format up and running. We welcome your suggestions, tips, and leads. Are you reading of any new startups in the videoconferencing space? Let us know.

Meantime, we’ll still be developing Rare Book Cafe on Facebook, Twitter, and Blogger. Only our video presence will be iced down in a cryogenic chamber down the hall from Walt Disney and Ted Williams, and only until new technologies can bring the show back to life. And yes, we know that for Uncle Walt, it’s been fifty years now.

We’ll be back, after a few messages. Really. Scout's Honor.