"-and several would be marvelous": Owen Felix O'Neill returns to Rare Book Cafe, a $25m book in his pocket. 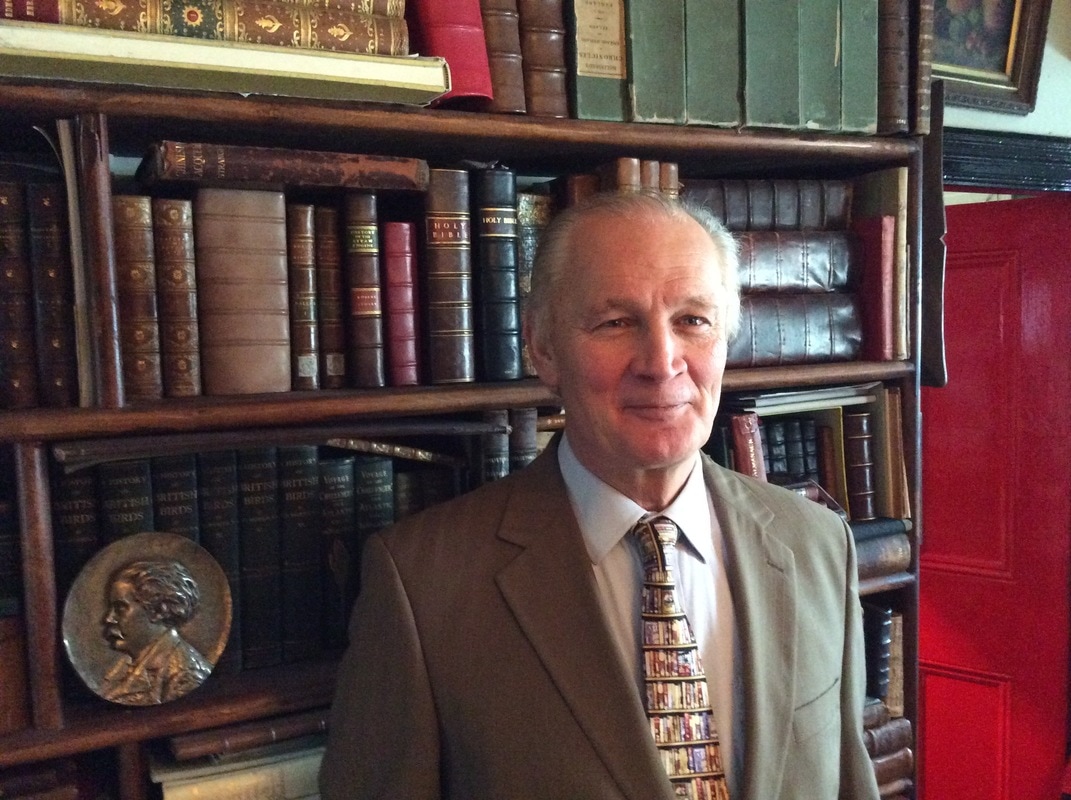 Surrounded by ancient books and ephemera in an ancient house in Tipperary, Ireland, Owen Felix O’Neill is a romantic:

I am a Bibliophile; an otherwise rational member of the community consumed by the love of Books. It gives me great pleasure to handle any printed work that has something important to say, but most of all I cherish Rare Editions, Finely Printed Texts, beautifully Illustrated Books, and Volumes Scarce and unprocurable except by knowledgeable means. The mute but Articulate ranks of Old Leather Bindings and time-mellowed spines that climb in order of size from floor to ceiling in the house where I am writing, exude a sense of ageless serenity and unruffled calm. Looking at close-packed rows of Octavos and Duodecimos that top the dusted oak shelves, the 18th. Century, Quartos in their blind-stamped, immediately below them, then down at the ponderous Folios, secure behind their bevelled wooden-boards and coats of sprinkled calf. I know of the decades that have emerged into Centuries since their original owners unpacked the parcels that brought them home. Now they are with me, collected over many years. It was once said that Books are ‘The lasting Mansions of the Dead’…They have become my faithful and trusted friends and the intimate companions of my everyday life. To part with one of them disturbs me. To lose them all would translate me to a barren existence and a life lacking its chief intellectual comfort and most relaxing pleasure.

O’Neill, who has done business as Felix Rare Books for nearly half a century, is making his third visit to Rare Book Cafe this Saturday, May 6, at 2:30 EDT. His last appearance, on September 29, 2015, was pure magic; he took viewers on tour of his home and collections, and explained his unique bookhounding style: “I drive up to old houses in the country and ask if they have anything interesting in the cupboards.”

One such lark- visiting a Catholic seminary in Dublin- led to O’Neill’s discovery of a lost cache of letters from Jackie Kennedy to a priest over a fourteen-year period. Put up for auction by the cash-strapped priests, the letters were widely quoted in the press and were expected to fetch over a million dollars when the fathers reclaimed the letters and canceled the auction in May 2014.

In September of that year, they announced that the letters were returned to Mrs. Kennedy’s daughter, US Ambassador to Japan Caroline Kennedy Schlossberg, after she retained Irish counsel and asserted she held copyright to them.

O’Neill occupies the stratosphere in rare book sales: his website advertises an inventory of over 3,000 books valued at about $9.5 million; specially featured is his genuinely priceless “William Tyndale's New Testament of Our Lord Jesus Christ of 1534.”

After acquiring it over thirty years ago, O’Neill has decided to sell his only-copy-in-existence.

“No complete copy...has ever come to the marketplace to be sold,” he says. “And there are no complete Tyndale's New Testament of 1534 in any Libraries or Museums world-wide. And none anywhere in North America.

“So there are no Auction Record prices to go on as a guide.
“William Tyndale's New Testament of Our Lord Jesus Christ 1534 has been described as 'the most important book in the English Language'. As well as being the 1st. printed Edition of the New Testament in English, it is the first English translation of the Bible drawn directly from both the Greek and Hebrew Holy Texts. Our copy of William Tyndale's New Testament of Our Lord Jesus Christ is the 1534 revision, which was made by William Tyndale himself. It is printed, unusually, on yellowish paper. The 1534 edition is the first instance of the use of the word 'Elder' rather than 'Priest'. Some pages carry old 16th. or 17th. handwritten notes.”


Entertaining and witty, Owen Felix O’Neill’s visits are not to be missed. Justice Benjamin Cardozo could have had Saturday in mind when he wrote, in an early 20th century decision, “If we may not say of such a coincidence that it is literally impossible, at least we may say that one would be surprising, and several would be marvelous.”

Rare Book Cafe is sponsored by the Florida Antiquarian Book Fair. It’s broadcast every Saturday from 2.30 to 3.30 pm EDT and features interviews, panel discussion and stuff you can learn about book collecting whether you are a regular at Sotheby’s or just someone who likes books. The program airs live on Rare Book Cafe’s and the Florida Antiquarian Book Fair’s Facebook page; the Book Fair Blog, and the Book Fairs YouTube channel. Shows are archived on YouTube and can also be viewed on the Facebook pages, and the blog after their first run.Hosted by Miami book dealer, appraiser and WDBFRadio.com’s Bucks on the Bookshelf radio show creator Steven Eisenstein, the program features a revolving set of cohosts and regular guests including Thorne Donnelley of Liberty Book Store in Palm Beach Gardens, Florida; Lindsay Thompson of Charlotte’s Henry Bemis Books; miniature books expert Edie Eisenstein; and program creator/producer T. Allan Smith.Rare Book Cafe program encourages viewer participation via its interactive features and video: if you've got an interesting book, join the panel and show it to us! If you’d like to ask the team a question or join us in the virtually live studio audience for the program, write us at rarebookcafe@gmail.com.