Grover Cleveland and the Mugwumps 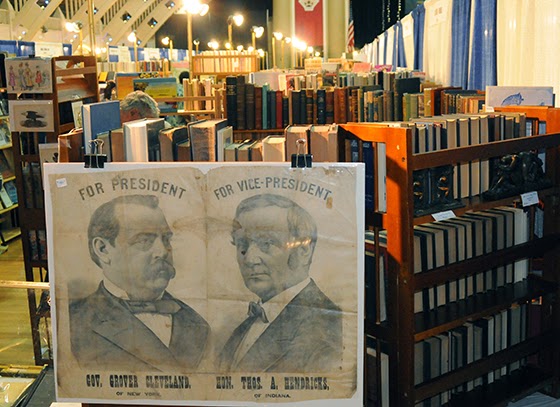 Love that headline. (Sounds like an early '60s rock band.)

We spotted this poster at the 2013 Florida Antiquarian Book Fair. It must have been delicious discovery for students of American political history. It's from the presidential campaign of 1884. Grover Cleveland and Thomas Hendricks ran against James G. Blaine and John A. Logan. Household names, all. ;-)

Okay, so Grover Cleveland may be one of the more obscure presidents in American history. Still, as any history major will tell you, there's an interesting story there, even for civilians.

Seems Cleveland won that election because of the Mugwumps. (Now there's a term you don't hear every day but you might have come across it sometime or other.) Cleveland was a Democrat; in fact, he was the first Democrat to get elected president since Reconstruction after the Civil War. Six terms the Dems were out of office, and Republicans ruled the roost.

Anyway, the reason Cleveland won: Mugwumps. They were renegade Republicans who took a dim view of their candidate's financial scandals (railroads had paid him off to dispose of mortgage bonds and land grant bonds for them). So the Mugwumps decided to buck the system and support Cleveland. They were ridiculed as fence sitters, political creatures with their mugs on one side of the fence and their "wumps"on the other.

So, the point of all this?  It's just another illustration of the amazing items you'll find at the Florida Antiquarian Book Fair. Okay, so maybe 130-year-old political ephemera isn't for everybody but this kind of thing will thrill some people.  We know a history prof who'd love to get his hands on something like this.

Stay tuned. In future posts, we'll have more examples of the kinds of must-have items you're likely to find at the 2014 Florida Antiquarian Book Fair.