We cannot live without books, and book lovers 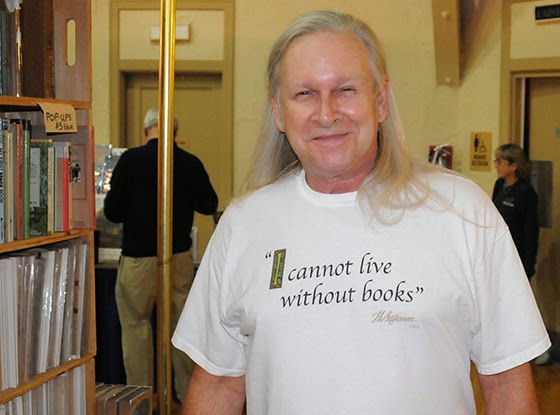 This gentleman attended the 2013 Florida Antiquarian Book Fair. We like his way of thinking as reflected on his t-shirt. We cannot live without books, either.

Interesting thing about that Thomas Jefferson quote, though. It's incomplete and it's taken out of context. Here's what happened:

John Adams was the second president of the United States when Congress agreed to spend $5,000 to set up a library. It became the Library of Congress (of course). Jefferson, who was the third president, encouraged expanding the library. So did James Madison, who succeeded him. The Americans had quite a nice little 3,000-volume library by the time the British attacked in 1814, burned the Capitol (where the library was housed) and pillaged the collection.

Jefferson was crestfallen, and decided to do something to help. At the time, the ex-president had the largest personal library in the country. He hit upon an idea that he thought would help the country quickly regain it's national library (not to mention helping himself acquire much-needed cash. He decided sell a large portion of his personal collection to Congress. He received $23,950 for about 6,500, which works out to be about $3.69 a book.

Anyway, he wrote to Adams explaining his reasoning for the sale. "I cannot live without books," he told John Adams, "but fewer will suffice where amusement, and not use, is the only future object." Jefferson wanted to send his books to a place where they would be used. So, actually, Thomas Jefferson was talking about downsizing, not adding to his collection.

However, judging from the cottage industry that has grown up putting Jefferson's words on not just t-shirts, but also tote bags, hats, coffee mugs, posters, note pads, tea towels, and pillows, it seems clear that a significant number of people hold the sentiment suggested by the partial quote, which is just fine with us.

We know that many book lovers who agree will attend the 2014 Florida Antiquarian Book Fair in March. We'll be there to enthusiastically welcome them because booksellers can't live without them.
at 6:00 AM