Every line of human endeavor has its in-jokes.


"When I played viola," Lindsay Thompson, Rare Book Cafe co-host, writes, "my favorite about my tribe was told by Garrison Keillor in his 'Young Lutheran’s Guide to the Orchestra'- a play on Britten’s 'Young Person’s Guide', only with 'Jesus Loves Me, This I Know' as the work that showcases the different sections of the orchestra.


“'Viola players are bitter, angry men,' Keillor explained. 'They study for years to get a seat in the orchestra, then discover no one can hear anything they play. They hang out in rail yards at night, sitting around 50-gallon drums of burning trash, and talking of running off to Mexico with a girl named Rita.'”


Among booksellers, miniature book dealers are the sort who show up just before the doors open, bearing only a couple of briefcases. They are the first to leave, as they have nothing to break down and lug out to a van.


They have excellent posture, never having to do any heavy lifting. Their houses never need the flooring and foundations shored up.


Because they do not need miles of bookshelves, their abodes tend to have large windows, and to be filled with light. They never develop dust allergies.


On the other hand, it is not a good line for the absent-minded. You can really lose stuff.


Take the Guinness-certified smallest book in the world:


Teeny Ted from Turnip Town (2007), published by Robert Chaplin, is certified by Guinness World Records as the world's smallest reproduction of a printed book. The book was produced in the Nano Imaging Laboratory at Simon Fraser University in Vancouver, British Columbia, Canada, with the assistance of SFU scientists Li Yang and Karen Kavanagh.
The book's size is 0.07 mm x 0.10 mm. The letters are carved into 30 microtablets on a polished piece of single crystalline silicon, using a focused-gallium-ion beam with a minimum diameter of 7 nanometers (this was compared to the head of a pin at 2 mm across). The book has its own ISBN, 978-1-894897-17-4.
The story was written by Malcolm Douglas Chaplin and is "a fable about Teeny Ted’s victory in the turnip contest at the annual county fair."
The book has been published in a limited edition of 100 copies by the laboratory and requires a scanning electron microscope to read the text.
In December 2012, a Library Edition of the book was published with a full title of Teeny Ted from Turnip Town & the Tale of Scale: A Scientific Book of Word Puzzles and an ISBN number 978-1-894897-36-5. On the title page it is referred to as the "Large Print Edition of the World's Smallest Book". The book was published using funds from a successful Kickstarter campaign with contributors' names shown on the dust jacket.


But by early 2013, The Telegraph newspaper reported, there were new contenders for biggest bragging rights to the smallest volume: 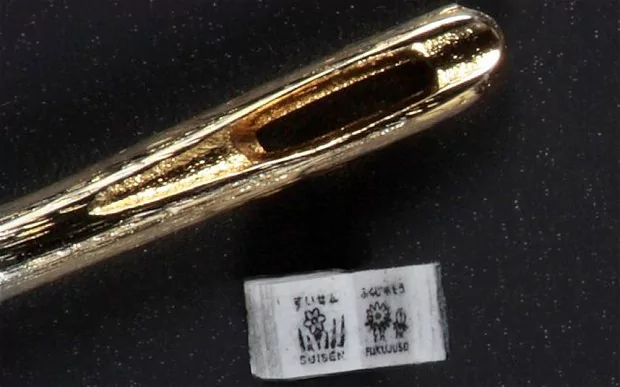 Japan has created what it is claiming is the smallest ever printed book, with pages measuring 0.75 millimetres (0.03 inches) which are impossible to read with the naked eye.


The 22-page micro-book, entitled Shiki no Kusabana (flowers of seasons), contains names and monochrome illustrations of Japanese flowers such as the cherry and the plum. Toppan Printing, who have been making micro books since 1964, said letters just 0.01 mm wide were created using the same technology as money printers use to prevent forgery.


The book is on display at Toppan's Printing Museum in Tokyo, and is on sale, together with a magnifying glass and a larger copy, for 29,400 yen (£205).
Toppan said it would be applying to Guinness World Records to claim the title of world's smallest book, presently held by a 0.9 mm, 30-page Russian volume called Chameleon, created by Siberian craftsman Anatoliy Konenko in 1996.
The smallest reproduction of a printed book is Teeny Ted from Turnip Town, a Canadian book that cost £10,000. It was 0.07 mm x 0.10 mm and the letters are carved into 30 microtablets on a polished piece of crystalline silicon.


This Saturday, July 29, bring a magnifier: the Rare Book Cafe team will put in the full hour on Miniature Books!


Edie Eisenstein, the Cafe’s resident tiny bookist, will lead an in-depth visit with collector and Miniature Book Society authority Todd Sommerfeld. The international group’ conclaves are legendary; the next is August 11-14, 2017 in Oakland, CA.


So plan to sit close to the screen!


Rare Book Cafe is streamed by the Florida Antiquarian Book Fair. It’s broadcast every Saturday from 2.30 to 3.30 pm EDT and features interviews, panel discussion and stuff you can learn about book collecting whether you are a regular at Sotheby’s or just someone who likes books.The program airs live on Rare Book Cafe’s Facebook page, and remain there after the show.Hosted by Miami book dealer, appraiser and WDBFRadio.com’s Bucks on the Bookshelf radio show creator Steven Eisenstein, the program features a revolving set of cohosts and regular guests including Thorne Donnelley of Liberty Book Store in Palm Beach Gardens, Florida; Lindsay Thompson of Charlotte’s Henry Bemis Books; miniature books expert Edie Eisenstein; ephemera expert Kara Accettola; and program creator/producer T. Allan Smith.We enjoy the support and encouragement of these booksellers: Little Sages Books in Hollywood, Florida; Liberty Books in Palm Beach Gardens; As Time Goes By, in Marion, Alabama; Quill & Brush in Dickerson, Maryland; Lighthouse Books in St. Petersburg; The Ridge Books in Calhoun, Georgia; and Henry Bemis Books in Charlotte. Rare Book Cafe program encourages viewer participation via its interactive features and video: if you've got an interesting book, join the panel and show it to us! If you’d like to ask the team a question or join us in the virtually live studio audience for the program, write us at rarebookcafe@gmail.com.
at 9:40 PM