How is Rare Book Cafe like late-night TV ads? We, too, are always shouting, "But wait! There's more!" 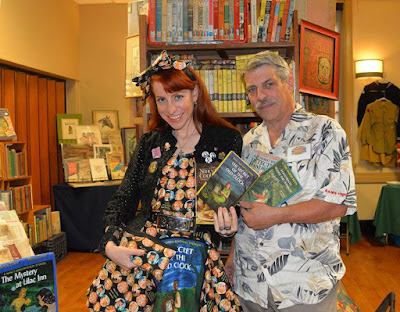 Good news! Longtime Cafe friend and New Hampshire book dealer Richard Mori joins us for a walkabout of the antiques and collectibles show he’s attending in the St Petersburg Coliseum, and showing us some of the treasures he’s brought south from Franklin.

Richard Mori is a local dealer of antiquarian or used books and has been buying and selling for over 25 years. His passion is selling, buying, appraising and enjoying rare and antiquarian books. He spends time traveling around the country attending book and antique shows.

After scouting Franklin for some storage space for his book collection, he and a friend opened Franklin Falls Book and Art Store on July 1, 2017. The store carries used and collectible books, over 5,000 postcards and local historical materials.

Mori’s expertise ranges from the author Tasha Tudor to Boy and Girl Scouts books and ephemera (here’s an audio interview about that) to children’s books. A Denver Post reporter profiled him on a visit to the Mile High City:

Collectors first started to take notice of children's books in the 1930s, but the genre began to hit its collectible stride in the 1980s as boomers reached an age where they were stricken by nostalgia for childhood.

Their old children's books became a way to recapture that time, said Richard Mori, a New Hampshire book dealer. Mori will be on a panel that will discuss collecting children's books at 1 p.m. Saturday at the Rocky Mountain Antiquarian Book Fair…

Mori said children's books are the babies of literature, with very few published before the 1870s and 1880s.

"To put it into perspective: They have been publishing books for 500 years, but it is really in the last 200 years that they have actually printed anything oriented to children and, in truth, it is only in the last 100 years or so that children's books have had a very defined market,'' he said.

The birth of children's literature resulted from societal changes spurred by the Industrial Revolution, technological advances in printing after the Civil War, especially chromolithography, and the emergence in England of a group of talented artists trained to illustrate books, Mori said.

The artists were a key ingredient in the new popularity of kids' books. Among them were Howard Pyle, Kate Greenaway, Jessie Wilcox and Walter Crane.

Then in the 1930s Joseph Blanck published "Peter Parley to Penrod,'' which was a guide to the best-loved American juvenile books.

"That was probably the seed that started in earnest the collecting of children's books,'' Mori said.

Rare Book Cafe program encourages viewer participation via its interactive features and video: if you've got an interesting book, join the panel and show it to us! If you’d like to ask the team a question or join us in the virtual live studio audience for the program, write us at rarebookcafe@gmail.com.
at 10:42 PM