Win a first edition this weekend on Rare Book Cafe!

This week’s Florida Antiquarian Book Fair Contest is sponsored by St. Petersburg’s Lighthouse Books. The prize is a first edition of a classic novel by the wild man of Florida literature, Harry Crews- The Mulching of America. 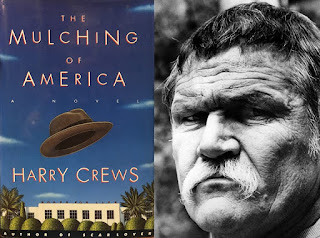 For 25 years, Hickum Looney has sold the most products for the Soaps For Life company, a record exceeded only by the Boss himself, a snaggle-toothed maniac with a harelip who promises salvation through his crappy soap products and has amassed a fortune doing it. Hickum, based in Miami, leads the properly anonymous existence of a company man, but everything changes when two females come into his lonely life. Ida Mae, an old woman abandoned by her husband, helps Hickum sell more products in a single day than anyone else has ever sold. This has incredible repercussions at the home office in Atlanta, where the Boss sees his worldview challenged. Meanwhile, Gaye Nell Odell, a young ex- prostitute, along with her vicious pit bull, Bubba, shoves her way into Hickum's solitary life. She and the equally ``rank and randy'' Ida Mae help Hickum overcome such embarrassments as chronic diarrhea and insecurity about his ``little raggedy ass Vienna sausage'' of a penis. The Boss has his own problems: his chauffeur, an ex-con who's tired of being booted in the butt; and his trainer, who suffers similar physical abuse for the money. The two are plotting revenge when the entire crew is sidetracked by an even stranger plot involving a major company shakeup and the fulfillment of a long-held rumor concerning the fate of ousted employees.

Imagine, if you can, a cross between Erskine Caldwell, Flannery O’Connor, William Faulkner and Carson McCullers. Imagine him, next, a frequently drunk, profane ex-Marine who said he grew up in “the hookworm and rickets belt” of South Georgia. If you can conjure the likes of that, then you’ll feel right at home in the works of the novelist Harry Eugene Crews (1935-2012).

His family, and all his new neighbors as they moved, once a year, from one played out sharecropper farm to another, were so poor and ignorant most others who were poor and ignorant would have gazed on them, scratched their heads in wonder, and said, “Really?”

His childhood reading was mostly the Sears and Roebuck catalogue. Besides owning all the cool stuff in the world, they were astonishingly clean and happy-looking. At five, he survived a bout with polio, his legs drawn up behind him, racking him in spasms, as relatives, gawkers and faith healers consulted on the case.

After he got his legs back, he managed to fall into a cauldron of scalding water used to sear the hair off hog carcasses, and lived.

After three years in the Marines, he got a BA in literature and an MA in education at the University of Florida, where he studied with the Southern Agrarians novelist Andrew Lytle.

Even by the lurid standard of postwar Southern Gothic, Crews’ work was weird. He was 36 when his first novel was published. Margalit Fox wrote of it in his New York Times obit,

“The Gospel Singer,” published in 1968, [was] about a traveling evangelist who meets a lurid fate in a Georgia town, features characters of the sort that would people his dozen later novels: sideshow freaks, an escaped lunatic and a sociopath or two.

“You don’t intend to make a career out of midgets, do you?” Mr. Crews’s wife asked him early in his writing life.

Indeed he did. Besides midgets, later novels feature a 600-pound man who consumes titanic quantities of the diet drink Metrecal (“Naked in Garden Hills,” 1969); a woman who sings tenderly to her dead husband’s skull (“Scar Lover,” 1992); and, perhaps most famously, a man who eats an automobile — a 1971 Ford Maverick, to be exact — four ounces at a sitting (“Car,” 1972).

Crews and his wife married and divorced twice in a decade. They had two sons, and one drowned when he was four.

Though his books captivated many reviewers, they were not the stuff of best-seller lists, in part because they bewildered some readers and repelled others. But they attracted a cadre of fans so fiercely devoted that the phrase “cult following” seems inadequate to describe their ardor...Despite their teeming decadence, or more likely because of it, Mr. Crews’s novels betray a fundamental empathy, chronicling his characters’ search for meaning in a dissolute, end-stage world. His ability to spin out a dark, glittering thread from this tangle of souls gave him a singular voice that could make his prose riveting.

In addition to his journalism, Crews published fifteen novels, three collection of essays, and a memoir of his childhood. A rock band was named for him, and several others wrote songs based on his work. One of his books, The Indian Runner, was made into a movie by Sean Penn.

He quit drinking in the 1980s. It just seemed like the thing to do at the time. “I had an ex-wife and I had an ex-kid and I had an ex-dog and I had an ex-house and I’m an ex-drunk,” he told The Times in 2006. “I’ve supported whores and dopers and drunks and bartenders. Thank God I don’t do that anymore.”

"Listen,” he told one of his last interviewers, “if you want to write about all sweetness and light and that stuff, go get a job at Hallmark."

Of Harry Crews’ movie credits, were any not as himself? Discuss. 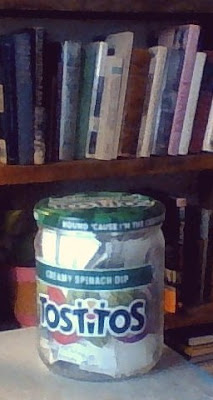 On Facebook, Private Message Lindsay Thompson with your answers. Answers will be accepted until 9 pm Friday, February 16, 2018. All correct answers will be sealed in a carefully cleaned Tostitos Creamy Spinach Dip Jar that no one from Price Waterhouse will get within miles of. The winner will be announced on the Rare Book Cafe show Saturday, February 17, 2018, 2:30-3:30 pm EST, on the Cafe’s Facebook page.