Saturday: Is "Unreliable" the novel for the #AltFacts age? 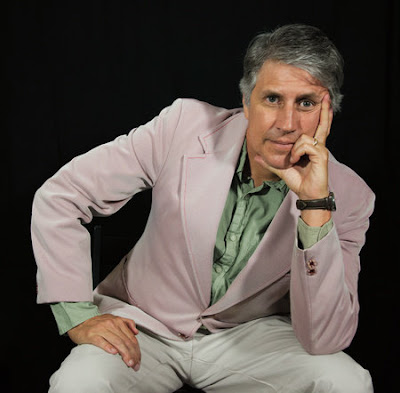 Until 1937, March 4 was mainly known as the day America inaugurated its presidents. This year, it’s Lee Irby Day on Rare Book Cafe!


Irby, who moonlights as a history professor at Florida’s Eckerd College, is the author of Unreliable, a new novel coming out from Penguin Random House April 18. His publisher- and who can be more unbiased?- says of the book,


Edwin Stith, a failed novelist and college writing instructor in upstate New York, is returning home for the weekend to Richmond, Virginia, to celebrate his mother’s wedding—to a much younger man. Edwin has a peculiar relationship with the truth. He is a liar who is brutally honest. He may or may not be sleeping with his students, he may or may not be getting fired, and he may or may not have killed his ex-wife, a lover, and his brand-new stepsister.


Stith’s dysfunctional homecoming leads him deep into a morass of long-gestating secrets and dangers, of old-flames still burning strong and new passions ready to consume everything he holds dear. But family dysfunction is only eclipsed by Edwin’s own, leading to profound suspense and utter hilarity. Lee Irby has crafted a sizzling modern classic of dark urges, lies, and secrets that harks back to the unsettling obsessions of Edgar Allan Poe—with a masterful ending that will have you thinking for days.


Unreliable is Irby’s fourth book. His first, 7,000 Clams (2005) and its sequel, The Up and Up (both were published by Doubleday) centers on the quirks of Florida's history, the interplay of natural beauty and rampant corruption and violence that marked the Sunshine State in the 1920s.


Indeed, in a story in the Eckerd College student paper this week highlighted those crosscurrents:


The interactions between people and the environment in Florida are a passion of Visiting Assistant Professor of History Lee Irby. He teaches classes such as Florida’s Fragile Environment and Florida History to highlight key Floridian environmental issues. He feels the phosphorus levels in Lake Okeechobee is one of the biggest concerns...Irby echoes nature writer and Everglades conservationist Marjory Stoneman Douglas’ words that “the Everglades is a test. If we pass, we may get to keep the planet”... “The ecosystem of the Everglades just doesn't reflect Florida history — it is Florida history, because the natural Glades took up the bottom 40 percent of the state,” Irby said. “The Everglades is dying a slow death, despite the efforts of well-meaning people, because the lifestyle of development and tourism will never mesh with what the Glades needs, which is clean, free-flowing water.”


Publishers Weekly reviewed Irby’s second book, The Up and Up, as the story of former bootlegger Frank Hearn,


just trying to make an honest buck in 1920s Miami when he falls down a rabbit hole of misfortune... Desperate to pay back a loan and prove himself worthy to the father of his well-heeled fiancée, Irene Howard, Frank joins his opportunist real-estate partner in a fixed jai alai bet. When the jai alai club's mobster owner finds out and sends his goons after them, Frank escapes only to be tossed in jail and robbed of his winnings by corrupt cops. His secretary bails him out the next morning, and Irene surprises him as he's clad only in a towel and an eye patch—just as the dishy secretary walks in with breakfast. Before Hearn has the chance to explain, he's charged with his not-so-lucky partner's murder. Irene, harboring a tiny shred of faith in her fiancé, pairs up with Horace Dyer, an honest Fed, to try to save Hearn. Ratcheting tension, smoothly incorporated flapper lingo, rich period details and likable characters should help win new fans for this humorous crime series.


So back to the Poe thing, and Unreliable, which is definitely not part three of his 1920s capers series. He recently let slip on Facebook,


Some reviewers have noted that UNRELIABLE contains "many literary references to Poe," a vapid observation that completely misses the mark. I don't merely reference Poe; Poe guides the entire novel, from first sentence to last. The book came into being because I based the plot on his last visit to Richmond, when he was destitute and desperate. At the time my career seemed over too and like Poe, I went home, mentally, back to Richmond. Only Richmond writers can truly get at Poe and his ruined aesthetes drifting through crumbling mansions while trying to explain the unspeakable. Our age is too glib for Poe, who until his death scratched and clawed to keep his career alive. Today he would have taught creative writing somewhere; then, it was the street. As Baudelaire wrote, Poe's work lacked "commercial smell." That used to be high praise.
Researching this promo, we looked around for tales of his mysterious past. See, especially for high-functioning introverts, it’s way easier to construct a statue of someone else’s life using the bits and bobs they’ve left scattered about the Internets, and- in addition- it makes it way harder  to complain we got the facts wrong.


So when he wrote, “Irby was born in Richmond, Virginia, in 1963. He graduated from the University of Virginia in 1986 with degrees in English and History. He then set about seeing the world, living in St. Croix, Italy, Mexico, and several major U.S. cities. He came of age in Key West, Florida, where he worked many odd jobs but found his voice as a writer amid the human debris of that island city,” we took him at his word.


He also has an authorial webpage.


Rare Books Cafe is sponsored by the Florida Antiquarian Book Fair. It’s broadcast every Saturday from 2.30 to 3.30 pm EST and features interviews, panel discussion and stuff you can learn about book collecting whether you are a regular at Sotheby’s or just someone who likes books. The program airs live on Rare Book Cafe’s and the Florida Antiquarian Book Fair’s Facebook page; the Book Fair Blog, and the Book Fairs YouTube channel. Shows are archived on YouTube and can also be viewed on the Facebook pages and the blog after their first run.Hosted by Miami book dealer, appraiser and WDBFRadio.com’s Bucks on the Bookshelf radio show creator Steven Eisenstein, the program features a revolving set of cohosts and regular guests including Thorne Donnelley of Liberty Book Store in West Palm Beach, Florida; Lindsay Thompson of Charlotte’s Henry Bemis Books; miniature books expert Edie Eisenstein; and program creator/producer T. Allan Smith.Rare Book Cafe program encourages viewer participation via its interactive features and video: if you've got an interesting book, join the panel and show it to us! If you’d like to ask the team a question or join us in the virtually live studio audience for the program, write us at rarebookcafe@gmail.com.
at 11:40 AM