For our March 18 program, Rare Book Cafe is off to Cape Cod for a chat- just as the nor'easter blew in this week with Jim Visbeck, owner of the legendary Isaiah Thomas Books. He’ll be talking about all sort of things, not least what it was like going to little theater productions of odd plays by Edward Gorey (he of Masterpiece Mystery opening credits) with RBC host Steven Eisenstein.

Visbeck proves Woody Allen’s maxim that “Showing up is 80 percent of life.” He told the Barnstable Patch,

Every job I’ve ever had has been offered to me.  I was in the library so often in my home town of Uxbridge that the Librarian offered me a job.  The library was a Carnegie building with wonderful architecture and wood interior.  The librarian was from Hungary, who escaped to America when the Communists invaded her country, smuggling her young son out. Her recommendation got me a job in the library of Worcester State College.  That librarian gave me a recommendation to Worcester Public Library where I assisted the Head in the move to their new building.  The new building was next door to Ephraim’s Books where I spent every lunch hour.  Mr. E asked me to work for him. When Mr. E’s disastrous fire occurred one of his best customers asked me to join him in opening a used book store. That was the start of my life altering relationship with the remarkable Taylor family:  I am blessed with their support and confidence.  And I am in awe of Lois and her family's accomplishments, ethics, kindness and humanity.

(A good interviewer also always leaves with an Extracted Secret: “Q: What is your favorite spot in town? In front of an oyster.”)

What else will you learn Saturday? He has a cat who’s a con artist: 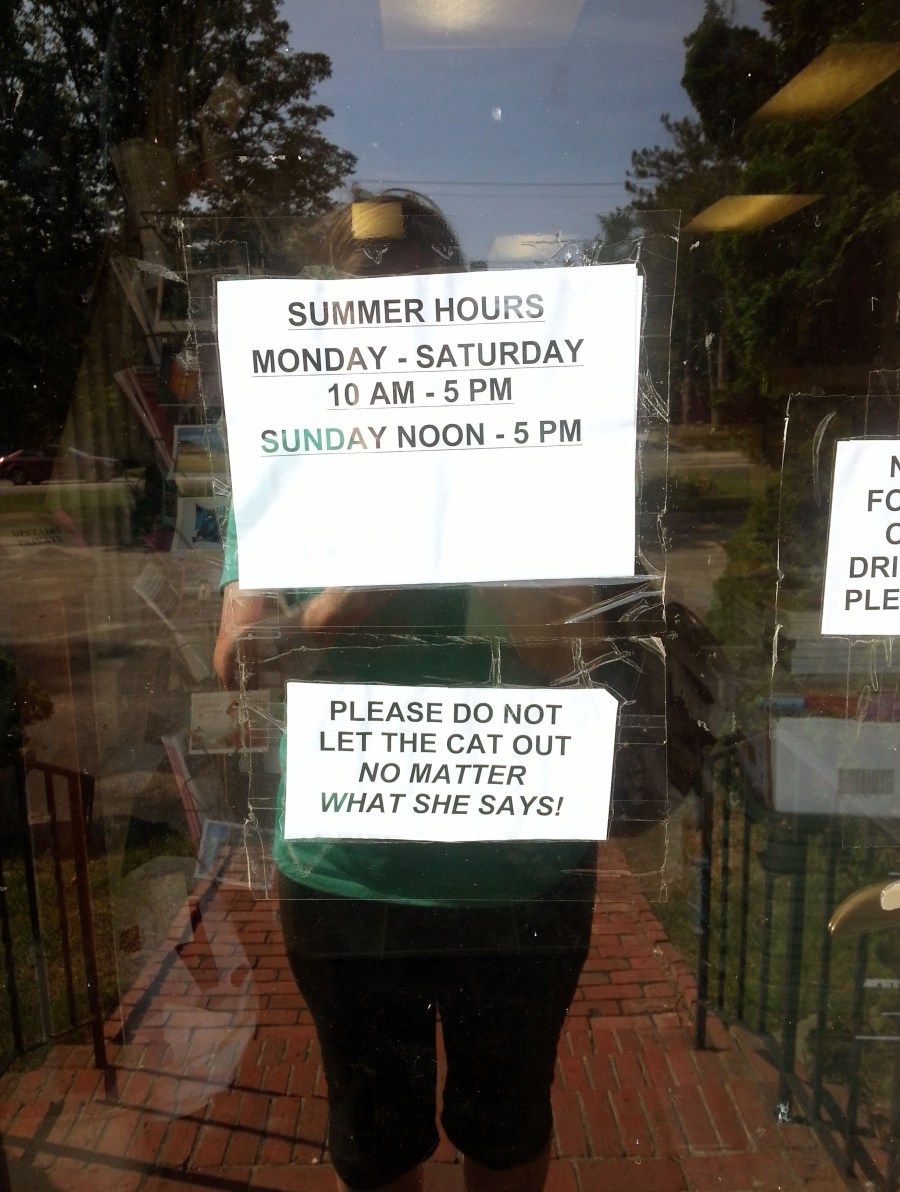 For Visbeck, there is nothing better than a used book - especially a rare one like his signed copy of "Gone with the Wind"; or books that came from Julie Harris, an American stage and screen actress from Cape Cod whom Visbeck called "selfless" in the way she cared for her books, many of which she collected during her 1973 Tony award-winning role as Mary Todd Lincoln in "The Last of Mrs. Lincoln.""She had many books by Emily Dickinson and hundreds of books about Mrs. Lincoln, along with her period costumes, which included at least 50 beautiful beaded clutch handbags she used in her shows," Visbeck said. "I learned so much about Julie Harris just because of her books, and I've come to find that you can explore a person's life just by what they read."Visbeck, who named the store after Isaiah Thomas, a Revolutionary-era printer and philanthropist and founder of the American Antiquarian Society, often engages with his customers as they shop in his store, browsing through pop-up books like "The Chronicles of Narnia," "Alice in Wonderland" and the "The Jungle Book," re-imagined by paper engineer Robert Sabuda; or the "Citizen Kane" poster brochure that originated from the movie's premier in 1941; or the extensive African-American history section that features a host of topics, including books about local history like "Lighting the Trail," which outlines the history of black culture on Martha's Vineyard.During his lifelong career in the used book business that began in Worcester in 1969, Visbeck has found that his customers love to immerse themselves a wide range of books, from fiction and biography to philosophy and religion. While he has encountered competition from what the internet has to offer, he credits the store's success to his "good taste" and "extensive knowledge" of authors, books and bargains."I like to think of myself as a merchant that's able to find the stuff people want to buy," Visbeck said. "My customers are serious readers with a purpose, and luckily there's not one junky book in this place. I like to think that makes a difference."Another aspect that helps Visbeck in his book business is the fact that area bookstores often cooperate among themselves to help provide customers with the titles they are searching for, including major outlets like Barnes & Noble. Visbeck said he was actually dismayed when Borders in Hyannis closed in 2012. 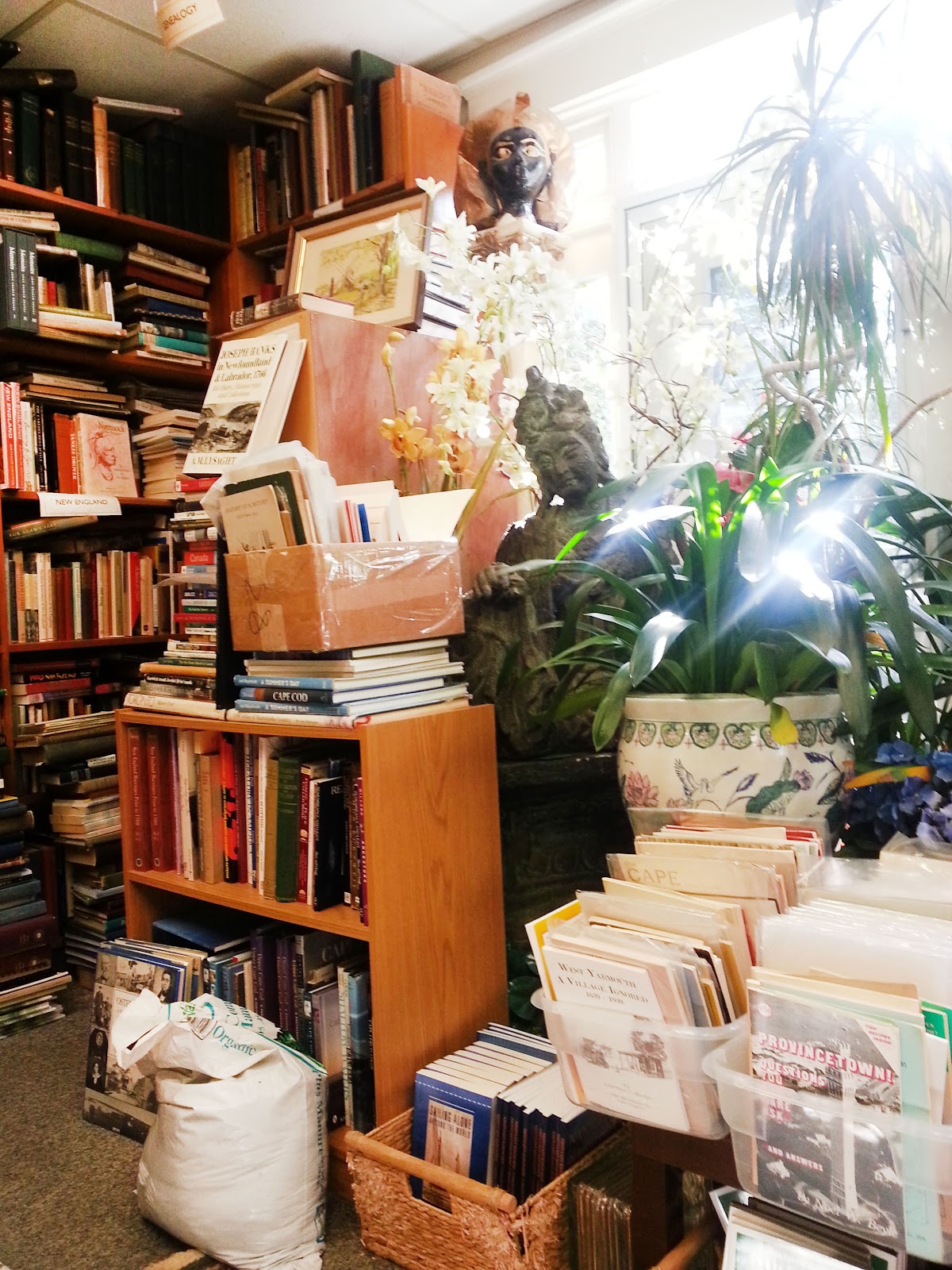 "Every time someone buys a new book, it's used as soon as they walk out the door," Visbeck said. "So when a bookstore closes I can't help wondering where some of my stuff is going to come from."And while it's usually Visbeck, along with Cali the Calico cat that patrons will encounter upon arrival at the store, Visbeck speaks highly of his partners, store co-owners Blaine and Lois Taylor, whom he met in 1969. While Blaine Taylor, who was a pastor at Wesley United Methodist Church before transferring to Osterville United Methodist Church in 1990, died in 1994, Lois still contributes to Isaiah Thomas Books, and Visbeck, who remembers Blaine fondly, said it's been a "journey of a lifetime.""The Taylors are a real book family and when Blaine and I started out he was bringing me wonderful books such as the first edition of James Joyce's 'Ulysses,'" Visbeck said. "It was then that I knew I had a lot to learn - fast - and working along with Blaine not only created an amazing friendship, it was great training."Over the last 26 years, Visbeck has continued to visit estate sales and other used bookstores searching for the perfect "treasures" for his store. And with every find, he hopes a curious customer will come to love the books as much as he does."The only thing that's changed is that I've become more choosy with the books I buy and sell," Visbeck said. "Books have become a life career for me, and I'll have to be dragged out of here if I ever leave at all." 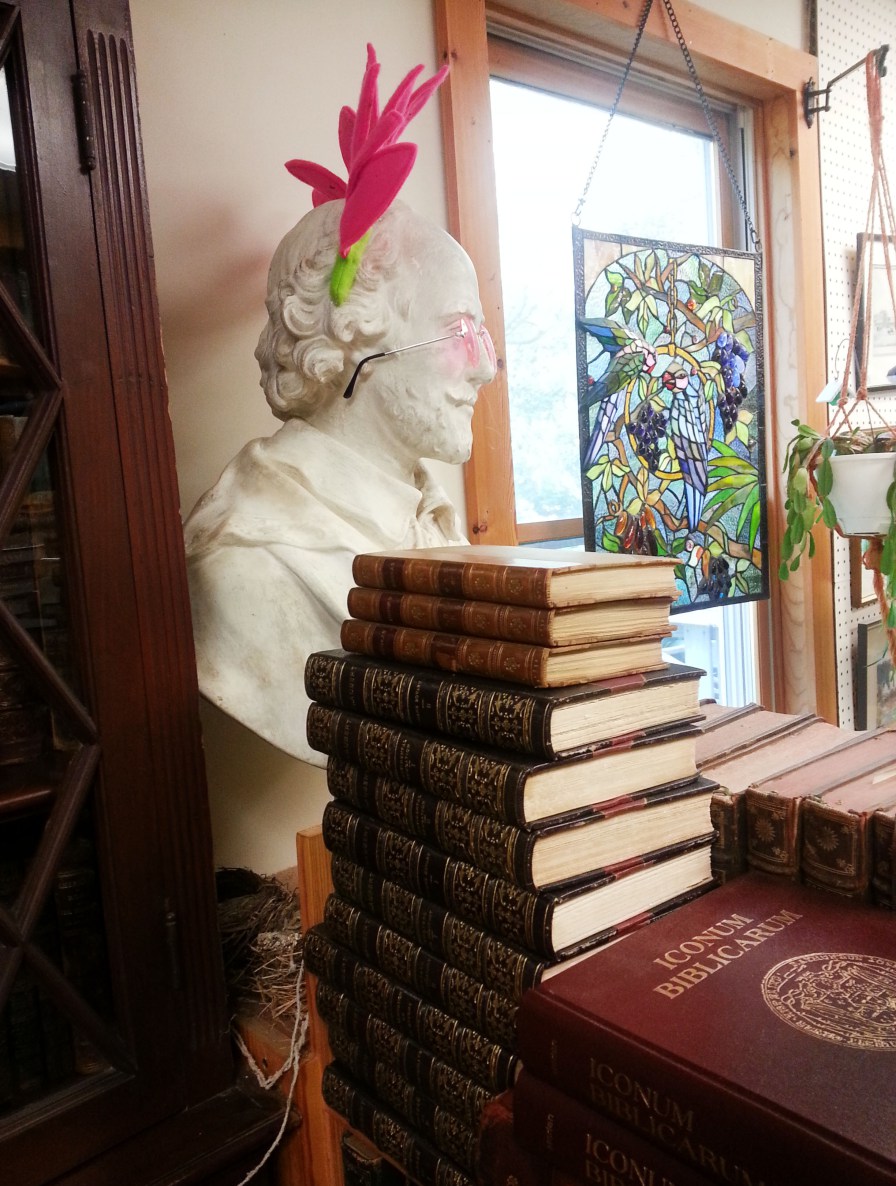 Rare Books Cafe is sponsored by the Florida Antiquarian Book Fair. It’s broadcast every Saturday from 2.30 to 3.30 pm EST and features interviews, panel discussion and stuff you can learn about book collecting whether you are a regular at Sotheby’s or just someone who likes books. The program airs live on Rare Book Cafe’s and the Florida Antiquarian Book Fair’s Facebook page; the Book Fair Blog, and the Book Fairs YouTube channel. Shows are archived on YouTube and can also be viewed on the Facebook pages and the blog after their first run.Hosted by Miami book dealer, appraiser and WDBFRadio.com’s Bucks on the Bookshelf radio show creator Steven Eisenstein, the program features a revolving set of cohosts and regular guests including Thorne Donnelley of Liberty Book Store in West Palm Beach, Florida; Lindsay Thompson of Charlotte’s Henry Bemis Books; miniature books expert Edie Eisenstein; and program creator/producer T. Allan Smith.Rare Book Cafe program encourages viewer participation via its interactive features and video: if you've got an interesting book, join the panel and show it to us! If you’d like to ask the team a question or join us in the virtually live studio audience for the program, write us at rarebookcafe@gmail.com.