Join us December 16 for a visit with the head of rare book conservation at the new Great Library of Alexandria! 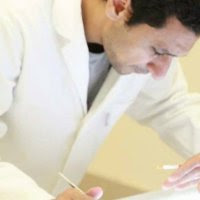 He holds degrees in Antique Photographs and Paper Heritage Conservation from Department of Chemical Science at the University of Catania, Italy, and Faculty of Applied Arts at the Helwan University, Egypt.

His portfolio is a broad one. He manages conservators and volunteers; develops standards, policies, procedures, and selection of materials used in the repair and conservation of rare library materials; researches specifications and sources of conservation materials or equipment; and oversees special conservation projects including grant-funded projects.

Afifi handles presentations and tours about the restoration laboratory activities for VIP visitors; plans, documents, and performs complex conservation and preservation treatments on materials held in the library's rare and special collections, principally bound volumes on paper with additional expertise in related areas such as maps, prints, drawings, and manuscripts on paper, documents on vellum, or other archival materials; advises library staff on the condition of collections, collection storage, handling, and exhibition; performs on site inspections, recommends appropriate action, and assists with its implementation.

He has won praise for developing mobile applications, particularly for conservators. Afifi also established Bibliotheca Alexandrina's first specialist conservation training center in Egypt and launched a highly successful YouTube channel to provide conservation tutorials. In 2015 he received an award in 2015 from the International Council of Museums in recognition of his work.


In October 2016 Director Afifi was a guest of Cafe co-host Steve Eisenstein on his radio program, Bucks on the Bookshelf.

Afifi’s home base, Bibliotheca Alexandrina, is one of the wonders of the modern world, evoking the spirit and ambition of the original Great Library of Alexandria. Founded in the third century BC, the Great Library one of the largest and most significant libraries of the ancient world for centuries. It was dedicated to the nine goddesses of the arts and was a center of worldwide scholarship until its destruction by one or more catastrophic fires.

An architectural design competition was organized by UNESCO in 1988 to choose a design worthy of the site and its heritage. The competition was won by Snøhetta, a Norwegian architectural office, from among more than 1,400 entries. Construction work began in 1995 and, after some USD $220 million had been spent, the complex was officially inaugurated on 16 October 2002.

The Bibliotheca Alexandrina is trilingual, containing books in Arabic, English, and French. In 2010, the library received a donation of 500,000 books from the National Library of France, Bibliothèque nationale de France. The gift makes the Bibliotheca Alexandrina the sixth-largest Francophone library in the world. The BA also is now the largest depository of French books in the Arab world and the main French library in Africa.

The dimensions of the project are vast: the library has shelf space for eight million books with the main reading room covering 220,000 sq ft on eleven cascading levels. 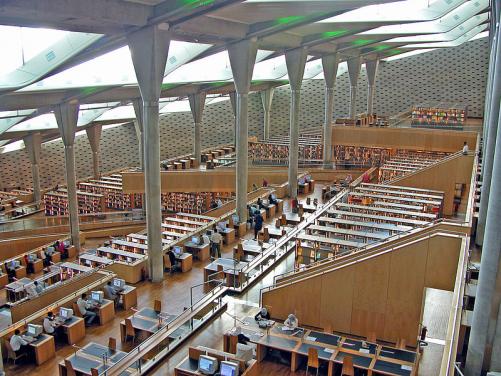 The complex also houses a conference center; specialized libraries for maps, multimedia, the blind and visually impaired, young people, and for children; four museums; four art galleries for temporary exhibitions; 15 permanent exhibitions; a planetarium; and a manuscript restoration laboratory. The library's architecture is equally striking. The main reading room stands beneath a 32-meter-high glass-panelled roof, tilted out toward the sea like a sundial, and measuring some 160 meters in diameter. The walls are of gray Aswan granite, carved with characters from 120 different human scripts.

The collections at the Bibliotheca Alexandrina were donated from all over the world. The Spanish donated documents that detailed their period of Moorish rule. The French also donated, giving the library documents dealing with the building of the Suez Canal; British donors have provided major collections relating their empire’s rule.

The Manuscript Museum provides visitors and researchers with rare manuscripts and books. Established in 2001, the Manuscript Museum contains the world's largest collection of digital manuscripts. It is an academic institution that is affiliated to the Library of Alexandria. The stated aims of the museum are to preserve heritage, foster human cadres in the conservation and restoration of manuscripts, and create a generation of new restorers.

The Manuscript Museum operates alongside the Manuscript Center, which provides digital access to more than 6,000 rare books, maps, and documents within the museum's collection. It has been estimated that it will take 80 years to fill the library to capacity.

Rare Book Cafe program encourages viewer participation via its interactive features and video: if you've got an interesting book, join the panel and show it to us! If you’d like to ask the team a question or join us in the virtually live studio audience for the program, write us at rarebookcafe@gmail.com.