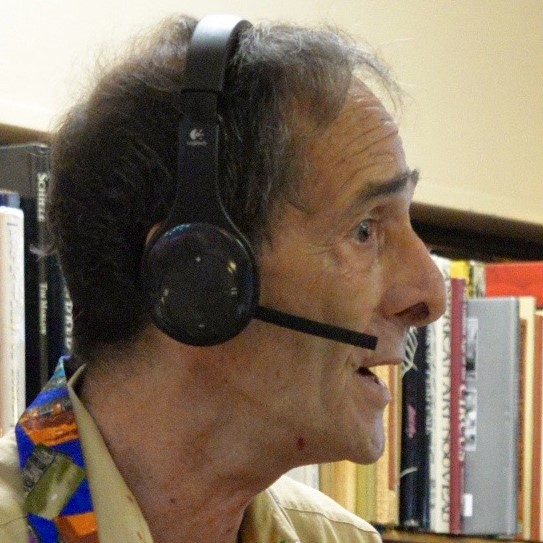 Combine a taste for Borscht Belt humor and a passion for rare books and ephemera, and you get Rare Book Cafe host Steven Eisenstein. His life ran on parallel tracks for decades, one as a hotel and resort entertainment director (“From The Poconos to Venezuela!”); the other- since he was a sprig of eighteen- in rare book sales and appraisals.

A Miami Beach resident since forever, Eisenstein is a popular figure- and a survivor- in the South Florida world of rare and collectible book dealers. He has published articles on rare books and collecting in a remarkable array of publications, including The Washington Post; American Farm Journal; The Dallas Morning Call, Art & Antiques Around Florida; Bookcase; and The Southern Book Trade Journal. He’s also a regular on Miami area news and arts television programs.

But his most significant accomplishment, in recent years, has been overcoming a deeply-treasured antipathy to technology to launch both an internet radio and television program about books and collectibles. Bucks on the Bookshelf debuted on wdbfradio.com in March 2015; in August, Rare Book Cafe followed on the now-defunct video platform, Blab, in August.

BOBS, as friends call it, is marching toward its hundredth program early next year, and has not only gained a worldwide following but inspired one of his guests to launch a sister show in Italy, Radio Bibliofilia.

Rare Book Cafe launched in August 2015 ln Blab a platform that rocketed to fame as the video chat venue of choice for hours-long monologues by the now-indicted, AIDS drug profiteer Martin Shkreli. A year later, its developers abruptly shut it down. But now Steven is leading the way on  a new technological platform, and is readying a new selection of AB Bookman’s Weekly stories for a new audience. It’s a true labor of love, doing back to back programs for half a day every Saturday, and we on the RBC team love him for it.
at 2:21 PM