Richard Mori, of Richard Mori Books in Franklin, New Hampshire, exhibits each year at the Florida Antiquarian Book Fair. Fans know him for his unusual children's books and classic series he frequently brings to the book fair. Richard also specializes in Americana, modern first editions, Boy Scouts and Girl Scouts, counter culture, cook books, and books about his passion of golf as well as baseball and fishing. 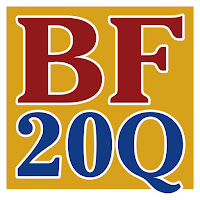 Although he lives in New Hampshire,  Richard arranges to spend considerable time in Florida. Considering that the temperature in Franklin was 27 degrees at this writing, we consider him a wise man indeed. We caught up with him the other day during his visit to a hideaway in Central Florida.  We persuaded him to participate in our new feature, Book Fair 20 Questions #BF20Q,  which is a mishmash of queries blatantly stolen and adapted from The Proust Questionnaire, James Lipton of Inside the Actors' Studio, and other more nefarious sources.

Richard hesitated not in the least, and he even took up temporary residence in his car to be close to a strong wi-fi connection, though his phone, on several occasions, seemed reluctant to cooperation. Richard, a self-described Luddite when it comes to modern technology, nevertheless, undertook the endeavor with characteristic enthusiasm. We were using BeLive.tv, a newly developed platform designed to allow for face-to-face interviews on Facebook, and Richard found little difficulty in getting himself on the air.

The result is a wide-ranging interview that gives insight not only what to expect from Richard at the book fair but also into his quirky, fun loving personality. Thank you, Richard, for joining us. To you, dear readers and fairgoers, we  hope you enjoy interview and we look forward to seeing you at the book fair.
at 10:03 PM