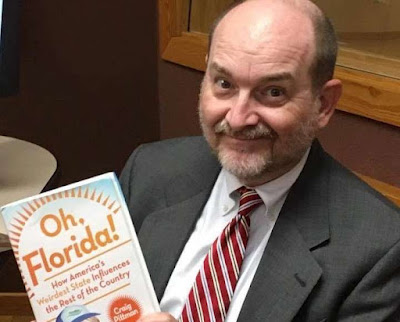 Another Florida writer, Kent Russell, wrote this of it for The New York Times Book Review:

"Every native Floridian, regardless of vocation, happens also to be a psychoanalyst of our state. This is because people, when they find out one of us is actually from the place (and they see our eyes are clear, and we do not twitch involuntarily like a sleeping pack animal), tend to take us by the arm and wonder earnestly: Just what is the deal with Florida?

"In his newest book, “Oh, Florida! How America’s Weirdest State Influences the Rest of the Country,” Craig Pittman tells those outside the peninsula: The deal with Florida is the charlatans and lunatics and Snapchat-famous plastic surgeons. It is the Ponzi schemes, the byzantine corruption, the evangelical fervor and the consenting-adult depravity. It is the seasonless climate. The lack of historical consciousness. The way in which this nation’s unctuous elements tend to trickle down as if Florida were the grease trap under America’s George Foreman grill. It is all of the above, and then some, and then more on top of that.

"Pittman, a veteran of The Tampa Bay Times whose Floridian bona fides date to 1850, writes that the book grew out of a series of Slate assignments chronicling the state’s endemic absurdity, which stories themselves were inspired by the litany of #Florida links he would post to Twitter. Pittman reprises this curatorial, cicerone-ish role in “Oh, Florida!,” where he aims to be “a cross between squinteyed Rod Serling and one of those patter-drunk boat captains on Disney’s Jungle Cruise,” leading us deeper and deeper into the state’s sucking bog of greed, chicanery and heartbreaking irony.

"And deep we go. Pittman guides us through 18 chapters of natural, economic, political, social and personal history, each painstakingly reported and researched. These he arranges into a compulsively readable, lifer’s-eye view of a state he so obviously loves to death. We get vignettes on the extraordinary meteorologist Grady Norton and the founding of the National Hurricane Center; Dickie Bolles and his great land swindle; William Cottrell, “the only American mayor ever deposed by a military coup.” We hear about the time Ralph Waldo Emerson visited Tallahassee, upon which he immediately (and correctly) adjudged it “a grotesque place.” We’re treated to a mini-profile of Florida’s beloved electric chair, Old Sparky. Had Pittman written this book a year later, we surely would have borne witness to the tragedy at Orlando’s Pulse nightclub; as it is, he delves into the shameful racist massacres of Ocoee and Rosewood in the 1920s.

"Pittman traces many national phenomena to their Florida roots. The first “stand your ground” law was pushed through by Marion Hammer, a former N.R.A. president who also fought against the adoption of the amicable scrub jay as state bird. (“Begging for food isn’t sweet,” she argued. “It’s a welfare mentality.”) Billy Graham got his start preaching to alligators along the banks of the Hillsborough River. Anita Bryant, whom Pittman refers to as “the Bull Connor of gay rights,” was previously Big Orange’s juice shill.

"...Pittman, who has worked at The Tampa Bay Times since 1989, is a walking museum, the type of wry newshound whose ­marrow-deep knowledge of place used to be indispensable to America’s major dailies. For as much as his book is a celebration of Florida, it is also a celebration of journalism. (Florida, after all, is the originator of the open-records “sunshine law” that many other states have since copied.) And professionals like Pittman are as endangered as the Floridiana that formerly lined the roadsides.

"Though his book contains an epilogue entitled “The Unified Theory of Florida,” Pittman doesn’t actually wager a hypothesis of his own. As a Floridian writer, I was bothered by this — until I realized that such a theory would miss the point entirely. Florida never will be fully captured. That, truly, is its deal: Florida exists hypothetically, in the future-­continuous tense. Florida will be a personal paradise, yours to own as soon as we fill in this hellish swamp. Florida will be growing in perpetuity, so long as we keep persuading suckers to move here. Florida will be underwater soon — let’s just hope it’s not as soon as experts predict."

One Pittman profile says, “He graduated from Troy State University in Alabama, where his muckraking work for the student paper prompted an agitated dean to label him ‘’the most destructive force on campus."


"For the paperback version of "Oh, Florida!' the publisher has asked me to go through the hardback looking for typos to be corrected. I've found quite a few so far. Of course, the big one I plan to point out to them is that the name on the cover should be 'John Grisham.'"

Cheeky, that, coming out on Grisham's birthday.

Pittman is the author of four books so far.

“I’m a big believer in using the ‘spoonful of sugar to make the medicine go down’ method of shoveling a lot of Florida history and culture down people’s throats,” said Pittman in a recent Florida Today interview. “I tell a lot of the weird, wacky stuff that happens in Florida, but I use it as sort of a setup for leading them into learning more about Florida history, some of which is admittedly pretty wild and weird also.”

Rare Books Cafe is sponsored by the Florida Antiquarian Book Fair. It’s broadcast every Saturday from 2.30 to 3.30 pm EST and features interviews, panel discussion and stuff you can learn about book collecting whether you are a regular at Sotheby’s or just someone who likes books.

The program airs live on Rare Book Cafe’s and the Florida Antiquarian Book Fair’s Facebook page; the Book Fair Blog, and the Book Fairs YouTube channel. Shows are archived on YouTube and can also be viewed on the Facebook pages and the blog after their first run.