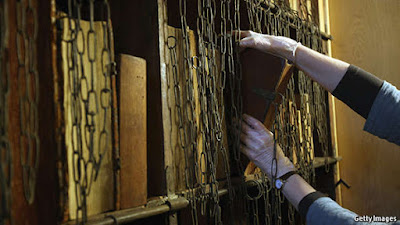 For the second year in a row, rare books bound for the California International Antiquarian Book Fair have been stolen in transit.The Antiquarian Booksellers Association of America posted this notice on February 1:


Books of significant value were stolen from a West London warehouse on the night of 29th January while in transit for the California Book Fair. A full police investigation is underway.A list of titles can be found here.  A further list will be circulated as soon as possible.If anyone offers you any of these titles, please contact the Police SCD6-ArtandAntiquesUnit@met.police.uk and quote crime reference number 0502127/17, ABA Secretary Camilla Szymanowska on 020 7421 4681 secretary@aba.org.uk or ABA Security Chair Brian Lake on 020 7631 4220 brian@jarndyce.co.uk  immediately.  For more details of individual copies, please contact the dealers directly.


116 books are listed as having been stolen. 66 were shipped by an Italian dealer with a total listed value of 884,450 euros ($943,000 US); fifty more were to be shown by an English dealer who did not disclose their values.


Last year, Chicago book dealer Lawrence van de Carr’s van was stolen outside the Oakland, California home he was visiting en route to the California Book Fair. Thieves made off with over four hundred rare books worth upwards of $350,000 US inside the vehicle. Within hours after the theft was discovered, two men attempted to sell several of the books at a store in Berkeley. One escaped and one was arrested. When the story dropped out of the news a month later, there were no leads in the case.

In 2015, The Economist reported the worldwide rare books market to be worth an estimated $500 million US per year, with more high-end tomes fetching eight-figure prices. Lax security and infrequent inventorying makes libraries the main target for book thieves, though the two California thefts may mark the opening of a new front in book crime.