October 7: Of prized books and prizes for books 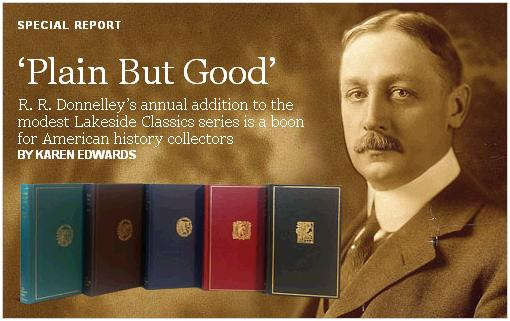 
Lakeside Classics is a series started in 1903 that reprints neglected classic works. According to company legend, Thomas E. Donnelley, then president of the company, was impressed by a set of seven razors presented to him by one of the company's suppliers, and wanted to create a gift that would similarly represent his own company's product and could not be purchased on the open market. The company did not sell the books to the public, but gave each of the company employees a copy at Christmas, making the series valued collectors items.Thomas Donnelley wrote in the introduction to Autobiography of Benjamin Franklin, the first volume in the series, that "If, in a modest way this volume conveys the idea that machine-made books are not a crime against art, and that books may be plain but good, and good though not costly, its mission has been accomplished." Following volumes featured speeches and writings of noted Americans, then in the 1910s selections turned to first-person narratives of American history, especially those which were rare or out of print. Themes included the Civil War, the Old West, exploration and frontier life. In the 1990s, several changes were introduced. Partly to acknowledge the company's global markets, narratives by Americans abroad were included.An early admirer wrote in 1923 that the printing, binding, and finishings were all done by the apprentice class to "illustrate the ideals of a well-made book," and that "not only are these books well made, but they contain historical works, autobiographies, and early travels unforgettable to him who loves this fair land." He concluded that the series is becoming "an institution near and dear to the collector of books of intrinsic value and beauty." Minor design changes were made occasionally and a major redesign every quarter century. In 1995, the date line on the title page was changed from "Christmas" to "December." For the redesign in 2003, Bruce Campbell, known for his work on The Library of America, was engaged. Among other changes, the gold-framing on the cover was restored and the typeface was changed from Bulmer to Garamond The company did not keep detailed records on how many copies were printed. The preface to the 1935 volume says that the print run for the first volume was 1,500 copies, but no further information was included in later editions. In the 1970s printings were in the tens of thousands. The hardest volume to find is the 1904 Inaugural Addresses of the Presidents, Washington to Lincoln. It is not known whether the run was smaller or whether collectors of Washington and Lincoln have kept them off the market by retaining them. The second scarcest is Fruits of Solitude, which may have been easy to lose because it had the fewest number of pages. The difficulty of finding the volume Memorable Speeches led one family member to joke that the speeches were so unmemorable that everyone threw them out. The Chicago publisher Reilly & Britton, a Chicago publisher, was given rights to reissue some of the earliest titles as “The Patriotic Classics.”By 2016, the series included 116 volumes.


Well, anyone could stop with that. Not the Cafe: Saturday, October 7 we’re getting the Lakeside Classics story from the mouth of Buddha: co-host Thorne Donnelley will tell the story of the family’s one-a-year, can’t-buy-’em-in-a-bookstore series.


But wait! as the late-night TV announcers cry. There’s more! Miniature books expert Edie Eisenstein will be pulling new wonders from her tiny bookshelves. And the group will be musing over the Nobel Prize in Literature, awarded for the 110th time this past Thursday to Japanese/British novelist Kazuo Ishiguro, including topics like who won and shouldn’t have; who didn’t win and should’ve; and whether the CIA helped decide the winner of one Cold War year’s gong.

We enjoy the support and encouragement of these booksellers: Little Sages Books in Hollywood, Florida; Liberty Books in Palm Beach Gardens; As Time Goes By, in Marion, Alabama; Quill & Brush in Dickerson, Maryland; Lighthouse Books in St. Petersburg; The Ridge Books in Calhoun, Georgia; and Henry Bemis Books in Charlotte. Rare Book Cafe program encourages viewer participation via its interactive features and video: if you've got an interesting book, join the panel and show it to us! If you’d like to ask the team a question or join us in the virtually live studio audience for the program, write us at rarebookcafe@gmail.com.
at 11:24 PM