Giving credit where it's due: whether with thanks to benign weather spirits, St. John of God, or blind luck, the Rare Book Cafe team has survived Irma

With over half of Floridians without electricity, it will be a while before we have news of colleagues in the rare book trade, but we can celebrate, even now, that the Rare Book Cafe team is all safe.

Thorne Donnelly and dog Katie boarded up and hunkered down in Palm Beach Gardens and report they are well. Kara Accettola and family and pets decamped to Ohio, and they are not only well but have great road trip stories.

Allan Smith and his wife moved to slightly higher ground with friends in Sarasota and emerged unscathed, Hurricane Irma obliged by easing up on the storm surge in the Tampa- St. Pete area, and first reports were of minimal damages chez Smith.

Steve and Edie Eisenstein retreated to an interior unit in their Miami Beach condo tower. They and the cats are back in their own now, getting by without power but with lights an cooking fear, and without damage.

They also report gratitude for the messages of support received from friends in the book community on Facebook; Steve even offered a shout-out to "the patron saint of booksellers." 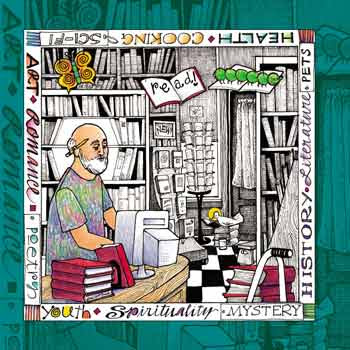 Cidade was born in Portugal to once well-off family. Probably kidnapped at eight, he ended up a street orphan in Toledo, Spain. A local landowner took the boy in as a shepherd, and Cidade did so well the owner wanted to marry him to his daughter.

The skittish Cidade joined the Army of Charles V, Holy Roman Emperor, instead, returning to the farm four years later.

In 1525 Cidade returned to military service and spent another eighteen years under arms. Mustered out, he traveled, experienced a growing, if indistinct, pull of religious activism, and set up in Grenada as a printer and bookseller after a vision from the Infant Jesus. He converted to Catholicism in 1537 and was, by all accounts, a model citizen, rescuing people from fires, aiding the poor, and circulating religious texts from his press.

At 42 he had a mental health break with reality and was confined to an institution for a time of suitably barbarous treatment. His reason returned and he created a ragtag volunteer care group that grew into the Order of Hospitallers. Cidade was renamed Father John of God and worked himself to death at 55. Sensing his nearing demise, Father John went over the order's accounts, appointed his successor, and died at prayer.

A biography was published in 1585; the Vatican canonized him in 1690. He is now the patron saint of booksellers, printers, firemen, the sick and nurses. The Order of Hospitallers is now officially charged with the medical care of the Pope and has medical operations in over fifty nations.
at 9:49 AM