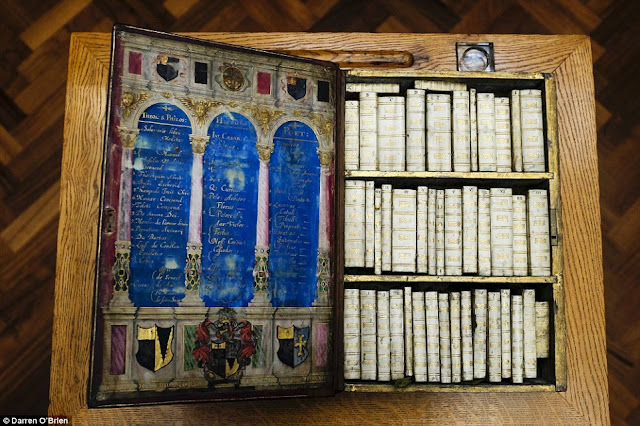 We just love this. We think our friend Edie Eisenstein, who does a segment about miniature books on the Rare Book Cafe would love it, too. This is billed as a first travel-sized library, a Jacobean miniature library that was the only way an avid reader could take a library along on a trip in 17th century England. It's a wooden case fixed up to look like a folio.

This photo by the extraordinary Irish photographer Darren O'Brien was part of an article that appeared in the UK's Daily Mail a couple of years ago but has recently resurfaced and has been making the rounds online. You really ought to take the time to look at the article and O'Brien's amazing photographs of the collection of miniatures in the possession of the University of Leeds. This is a fairly rare specimen. Apparently, only four were made. It dates from 1617. A researcher at the school's library was quoted as saying: "It's essentially a 17th century e-book reader such as a Kindle."

Now, that's not a word we often use in any context much less related to antiquarian books.
at 7:00 AM